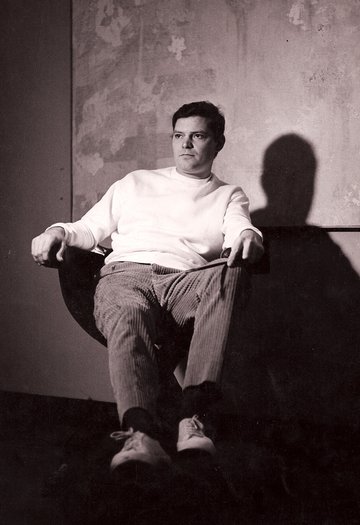 Giuseppe Franco Angeli was born in Via dei Piceni in the San Lorenzo district of Rome on 14 May 1935. He was the third and last-born son of Erminia Angeli and Gennaro Gennarini, an anti-Fascist; like his brothers Omero and Othello, he took his moth- er’s surname. After his father’s death, to provide for his ailing mother, Angeli began working at only nine years old: rst as a storeroom boy, then in a car body repair shop, and, lastly in an upholsters, where he handled fabrics, templates and scraps of cloth that he was later to use in his paintings. In addition to these jobs, he also worked for a radio station, where he sang for the Allied troops in Italy. Having never attended regular art classes, Angeli began painting in 1957 when stationed in Orvieto on military service, because as he explained later: “when you feel a deep malaise, you must look for a way not to be lonely. In short, you need to nd an interest that will accompany you in life.”1 After returning to Rome, he was stationed in the Granat- ieri Barracks in the Prati district, near the Vatican. At this time, he met sculptor Edgardo Mannucci, a friend of Alberto Burri. Angeli was fascinated by Burri’s work and was even to borrow the worn-out materiality of the Catrami (Tars). Signi cantly, on the subject of one of his own paintings, E da una ferita scaturì la bellezza (Out of a Wound, Beauty Pours Forth; 1957), a work based on the memory of the aerial bombing of San Lorenzo on 19 July 1943, he was to write: “Matter for me is a fragment of this huge wound that devastated Europe; my rst paint- ings were like that, like a wound from which I re- moved pieces of bandage.”2 His initial approaches to painting were also marked by his membership of the Italian Communist Party, which he quit, however, after the Soviet invasion of Hungary, and drew clos- er to the more radical left and Maoist movements. In March 1959, in a joint exhibition with Tano Fes- ta and Giuseppe Uncini, he showed his works for the rst time, in the Galleria La Salita, owned by Gian Tomaso Liverani, in Rome. In autumn, he featured together with Agostino Bonalumi, Jasper Johns, Yves Klein, Robert Rauschenberg and Mim- mo Rotella in the magazine Azimuth, founded by Piero Manzoni and Enrico Castellani. In January 1960, he was given his rst solo show by the Galleria La Salita: the works were characterised by veils of oil paints and nylon stockings, stretched tight and covered with gauzes. The effect of evoking memo- ries and absences was described by Cesare Vivaldi as the “tears of things”.3 In 1960, he also took part in a collective show, again at the Galleria La Salita, cu- rated by Pierre Restany and entitled 5 pittori. Roma 60 (5 Painters. Rome 60): Angeli, Festa, Lo Savio, Schifano, Uncini.

He now began to receive of cial acknowledgement, including a prize awarded by the Ministry of Edu- cation in collaboration with the Galleria nazionale d’Arte moderna, Rome, while in a short lm direct- ed by Mario Carbone, Inquietudine (Disqueit), he illustrated his painting technique.

In 1962, he took part in “New Perspectives of Ital- ian Painting”, a collective exhibition at the Galle- ria Comunale d’Arte Moderna, Bologna. Angeli showed a series of works with the rst symbols of power, initially swastikas, crosses and half-moons. “As Boatto has written, by covering his symbols with a veil, Angeli tends to lter out the objective violence.”4 That violence of real events was deeply signi cant for him and he was to continue to refer to it in his works. One example is the series entitled Cimiteri (Cemeteries) from the early 1960s: the se- quences of white crosses recall the power of Mau- ri’s Schermi (Screens) and the Achrome (Achromes) by Manzoni, with whom he was in close contact. Angeli portrayed fragments of history and recorded traces of contemporary events, creating works such as O.A.S. (1961), alluding to the illegal paramilitary French organisation during the Algerian war; Cuba (1960), on the other hand, was occasioned by the United States embargo shortly after Fidel Castro’s revolutionary forces had overthrown Batista’s dicta- torship; and 25 luglio (25 July; 1964), commemorates the fall of the Fascist regime in 1943.

In February 1963, he showed some works along with a poem by Nanni Balestrini in a collective exhibition of “13 painters” (13 pittori a Roma), in Plinio De Mar- tiis’s Galleria La Tartaruga. In May the same year, he was at the Galerie J in Paris, together with Christo, Conner, Kudo, Todd and Mauri in an exhibition curated by Restany: L’Object Pressenti. Shortly after- wards, in June, he held a solo show at the Galleria La Tartaruga with a series of works in which the value of the symbol – obsolete, conventional or even trag- ic – acquires a different gurative dimension, as he went beyond the legacy of Arte informale. In 1963, he also collaborated with Mario Diacono and Elio Pagliarani on the production of limited editions of books with handwritten texts and original drawings. For a solo show at the Galleria dell’Ariete, Milan in January 1964, Angeli resorted to stereotype ide- ological urban symbols, emblematic of the rhetori- cal, celebratory character of the archaeological nds in the eternal city: “My rst paintings describe my everyday contact with the street. I saw the ruins, tombstones, ancient and modern symbols, such as the eagle, the swastika, the hammer and sick- le, obelisks and statues of the Roman she-wolves. They released enough energy for me to set out on the adventure of painting.”5 These works became the “Capitoline Fragments”, which he presented in a Roman exhibition in October 1964 at the Studio d’Arte Arco d’Alibert, while in March he took part in a collective show with Umberto Bignardi, Festa, Giosetta Fioroni, Jannis Kounellis, Sergio Lom- bardo, Renato Mambor and Cesare Tacchi at the Galleria La Tartaruga. In June, he showed his work for the rst time at the Venice Biennale (32nd Inter- national Art Exhibition). In the two selected works, La Lupa (She-Wolf) and Quarter Dollar, his use of the veil obscures the signi cance of the underlying symbol, pushing it into the recesses of memory.

In April 1965, he was one of the prominent artists of In January 1969, he made his rst trip to the Unit- “A Generation”, an exhibition at the Galleria Od- ed States, ahead of the collective exhibition entitled yssia, Rome, while in autumn he had two simulta- Italian Art Show: Franco Angeli, Cesare Tacchi, Tano neous solo shows – at the Galerie J, Paris, and the Festa and Lorri Whiting, installed in the Contem- Galleria Zero, Verona – and was also present at the porary Arts Gallery, Loeb Student Center, New 10th National Art Quadrennial in Rome and in York in October and November. Meantime in Italy L’art actuel en Italie: semaines italiennes at the Mu- there were another two exhibitions: a solo show at nicipal Casino, Cannes. In 1965, he produced a se- the Galleria dell’Ariete in January and a collective ries of dazibaos: Compagni, Berlino 1945 (Comrades, show, Anno ’60 (The Year 1960), at the Galleria Berlin, 1945), Compagno vietnamita (Vietnamese Christian Stein, Turin, in April.

Comrade), Occupazione di un monumento equestre In the early 1970s Angeli continued to focus on (Occupation of an Equestrian Monument) and Ab- real political events as he produced a series of land- braccio eterno (Eternal Embrace). The revolutionary scapes, such as Dagli Appenini alle Ande (From the lyricism of these works prompted Dario Micacchi Apennines to the Andes) and Canto popolare delle to describe Angeli’s approach to painting as “seeing Ande (Andean Folk Song), a geometrically inspired and making reality be seen politically”.6 work dedicated to the coup in Chile of 11 September Angeli’s exploration of the symbolic world and his 1973; he returned to the Vietnam war in Anonimo politically commitment in painting led to a focus euroasiatico (Anonymous Eurasian; 1969) and Com- on coins: “Angeli saw the coin as the ‘small sym- pagni (Giap e Ho Chi Minh) (Comrades [Giap and bolic world’ that he had been seeking for years and Ho Chi Minh]; 1971), while he also addressed the previously thought he had found in ags, coats of military coup in Greece.

arms and stone inscriptions.”7 This was exempli ed In 1975, he met Livia Lancellotti, his life partner, by the solo show entitled Half Dollar, which opened who gave him a daughter, Maria, in 1976. In the at the Studio d’Arte Arco d’Alibert in January 1966 late 1970s and early ’80s, some “childishly joyful and his participation in several other exhibitions: toy airplanes, bearing death in Vietnam,”8 began to Italian Artists Today in Bucharest; Aspetti dell’arte appear in his landscapes and seemed also to recall italiana contemporanea (Aspects of Contemporary the bombings of the Second World War: “For any- Italian Art) at the Galleria nazionale d’Arte moder- one who knows him and sees him, because of this na, Rome, and Moderne Kunst aus Italien (Modern attitude, he [Angeli] clearly has a narrative drive in Art from Italy), Dortmund. In October, the exhi- which the threads of his personal life are inextrica- bition America America (Half Dollar) opened at the bly intertwined with those of history.”9

Galleria dell’Ariete with veiled gilded eagles in hues Angeli’s deep interest in social and popular-culture of blue, white and red. The same title was used for issues continued in his works of the 1980s, when he a solo show at the Studio d’Arte Arco d’Alibert in returned to the theme of war in a series of exotic March 1967; in April he took part in the collective landscapes with pyramids, obelisks and airplanes show of eight Roman painters at the Galleria De that eventually became Esplosioni (Explosions; Foscherari, Bologna, and in June he was one of 1986). The stylized forms have spires, capitals and “Eleven Italian Artists from the 1960s” in an exhi- deserted squares as if in “a grandiose, excruciating bition at the Spoleto Festival of Two Worlds, where sense of excavation in which history and life re-sur- he met Marina Ripa di Meana (previously Lante face as perfect, intact geometric solids radiating della Rovere), marking the beginning of an intense, fresh, fragrant pure colours – green, blue and red.”10 stormy love story, which lled the gossip columns The theme of “puppets”, which he developed from for a long time to come. In September, he took part 1984, became a kind of self-portrait that seems to in the 9th São Paulo Art Biennial and made his rst foreshadow the last stage of his life: Franco Angeli lm, Giornate di lettura (Reading Days), followed died in Rome on 12 November 1988.